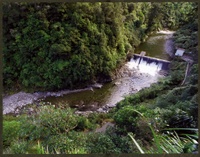 The Kaitoke area has a rich history for both Maori and other New Zealanders. The Whakataka Pa is said to have been in existence in 1820 at the Mangaroa River-Hutt River junction (Te Marua). A number of early Maori routes from Wairarapa to Wellington crossed the Pakuratahi flats. By 1856 a road was opened to connect the fertile plains of the Wairarapa with the port of Wellington.

Forests near what is now the park were important to early European settler communities, providing timber, farm supplies, water and transport routes. There is still evidence of the Benge homestead at Te Marua, while logging tramways can be found in the park along with abandoned machinery.

However, not all the forests were logged. In 1939 the untouched areas of Kaitoke Regional Park and the Hutt Water Collection Area were purchased to supply water to the Wellington region. World War II interrupted construction works and it was not until April 1957 that the dam-like water intake weir, an underground aqueduct and the first treatment plant were completed.

Since that time the Kaitoke area has been popular for picnicking and swimming. In 1976 the Wellington Regional Planning Authority identified the area as a potential regional park because of the unspoilt forests, as well as the recreational and educational opportunities. The park as it is now, began in 1983, with the aim of providing areas of open space for informal recreation.