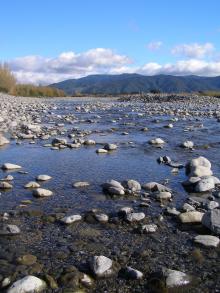 The Waiōhine River has a relatively long and narrow catchment area of 378 sq km on the eastern side of the Tararua Range.

From its headwaters at an elevation of 1500m, the river flows out onto the alluvial gravel deposits of the Wairarapa plains, over a distance of 20km to its confluence with the Ruamahanga River.

On the Wairarapa plains the Waiōhine River is joined by one major tributary, the Mangatarere, which has a catchment of 90 sq km in the Tararua foothills.

Waiōhine Project Team have been working for over a year to develop a plan to manage flood risks from Waiōhine River. The team comprises of members of Waiohine Action Group (WAG) – a group of passionate community members – officers from Greater Wellington Regional Council (GW) and a local hapu representative.

The Floodplain Management Plan is now being visualised as a more holistic ‘River Plan’ that includes broader range of options beyond just stop-banks. The plan includes both structural such as stop-banks and non-structural measures such as allowing more space for the river to meander.  The plan aims to include iwi perspectives and the community’s aspirations for the future of the river environment, as well as including flood mapping, climate change, river and emergency management.

GW adopted a model of engagement that allowed the community to develop a plan that not only enjoys the support of the community, but is also pragmatic, sustainable and affordable. Waiōhine Action Group, which volunteered to lead the engagement process under the new model with GW, has members of the local community with an interest in the FMP and expertise in operational work in the Waiōhine River including capability in engineering, hydrology, surveying and business/project management besides knowledge of local government functioning.

While it was challenging for GW to adopt a new model of engagement – a model we had never considered earlier -- the process has created a high level of trust on all sides requiring everyone to work in a different way. 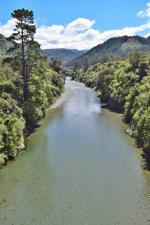 The Project Team has made its main recommendations on stop-banks, with a preferred option that has new stopbanks close to Greytown and set well back from the river. Recommendations on approaches to the river channel management and planning controls are nearly complete.

The Project Team is recommending that a “river plan” be developed. It is envisaged as a ‘living plan’ that can respond to changes, new information or major events in the future. It will provide mechanisms for the community to have ongoing input in how the river is managed. It aims to give the river more room to spread, reduce the impact on the Carterton side of the river and save money compared to the previous draft FMP.

The plan would exist online, and the various topics will directly link to the discussions and decisions that have been made and recorded along the way.

The most important outcome has been that the community is now engaged, owns the outcomes and is organising itself to be able to participate in the management of the river in future. 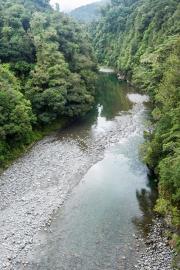 If you had provided a submission on the previous draft FMP, it has been fed into this new process.

As well as having opportunities to contribute to the new draft plan informally while it is being developed, you will also be able to provide feedback on the new draft plan once it’s ready. All previous submitters will be contacted again at this point.

The current work is being done through an open and inclusive process. Anyone is able to ask a question or make a contribution at any time. Following each Project Team meeting, the notes from the meeting and a summary are posted on the WAG Facebook Page and emailed to the WAG email list.

You can contribute at any point – questions or comments are welcome – by using the feedback link on the right or by contacting any member of the Project Team. WAG also coordinates a number of events such as public meetings. These will be announced through the Facebook page, the WAG email list and advertised locally. To have yourself added to the email list, please contact waiohineactiongroup@gmail.com

The Waiohine Action Group and Greater Wellington are consulting with the community on the new Waiōhine River Plan that includes the Waiōhine Floodplain Management Plan.

Your feedback and views are really important to us. You can make a formal submission to Greater Wellington on our plan on Have Your Say.

Project Team meets weekly and reports to a Steering Group which sets direction and provides feedback for this work. Other subject experts will be brought in when required. The project team consists of: