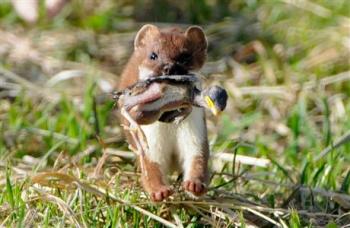 Why are stoats, weasels, and ferrets a problem?

These three members of the mustelid family are a major threat to our region's biodiversity. They continue to have a devastating effect on New Zealand's native animals and impact our farming industry. Mustelids eat:

Ferrets may carry Bovine Tb, which can infect cattle and deer herds.

Spot a mustelid? Here's what you can do...

Mustelids are relentless hunters, described as having only two reasons for living - to eat and to breed. They can hunt day and night, climb trees, have a territory of over a kilometre, and swim for a few kilometres. The mustelids in New Zealand are: 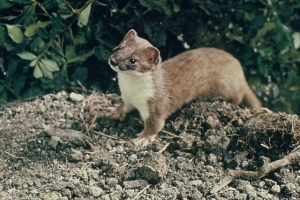 They may look cute, but they are 'public enemy number one' for New Zealand birds

These pests were introduced into New Zealand in the 19th Century in an attempt to control the rabbit population. The potential impact on the native bird species was known, but agriculture took precedence over the environment at the time.

Signs to look for

Mustelid droppings are long thin and strongly scented, often with a twist at each end. They are usually left in open places such as the middle of tracks or clearings.

They may leave dead prey with chew marks on their head or neck if they are disturbed.

If there are high numbers of rabbits, rats, chickens, or waterbirds then there may also be stoats.

The most effective way to control mustelids is regular and ongoing trapping.