Consents from GWRC - a summary and timeline

GWRC has granted two separate resource consents associated with the development of land at 131 Silverstream Road. These consents are referenced:

On 11 November 2016 – The developer lodged the resource consent application for WGN170115 [34402]. – This consent related to ceasing use of the existing 1050mm culvert located on private land and replacing it with a new 1600mm diameter fish passage friendly culvert and rock rip rap stream bed and bank erosion protect at the culvert outlet.

On 6 December 2016 - GWRC sent the developer a letter advising that they considered WCC to be an affected party as WCC own the land where the culvert was to be placed and the WCC Parks department administer the Reserve where the new culvert outlet was to be located.

On 8 December 2016 the developer obtained approval from WCC for a new stormwater easement which would allow them to run the new culvert through WCC land.

On 22 December 2016 the WCC Parks Department provided their written approval under section 95 of the RMA for the proposed new culvert works outlined in WGN170115.

Reasons why the developer applied for WGN170115

As part of the development of 131 Silverstream Road, the developer originally intended to utilise the existing 1050mm diameter culvert which conveys all flows from stream tributaries located on the site. However after commencement of bulk earthworks on-site (undertaken in accordance with WGN150264) the developer’s engineers conducted further inspection of the existing culvert and determined that it would not be fit for purpose for on-going use post completion of the development. Therefore the developer commenced planning and designing an improved replacement culvert that would be fish passage friendly and at 1600mm in diameter have a greater capacity to convey all flows from the tributaries located on site – up to a 1%AEP storm flow (1 in 100 year event).

Note: The existing 1050mm culvert was slightly perched (potential barrier to fish passage) and had considerably less capacity that the proposed replacement culvert.

A large section of the existing 1050mm culvert (including the point where the culvert discharges to the stream) is located on privately owned land. This proved to be an impediment to the developer as they were unable to obtain the approval of the land owner to undertake the works to replace the existing culvert along the same alignment. As a result the developer had to investigate running a new replacement culvert around the privately owned land. The developer’s solution was to propose a new alignment for the replacement culvert through WCC owned land comprised of road reserve and WCC park/reserve. 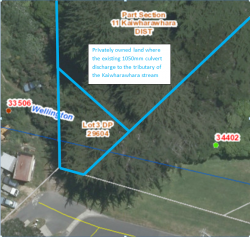 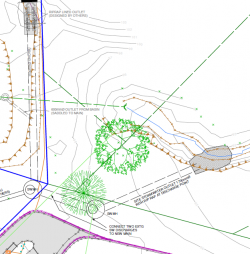 GWRC officers inspect/audit the Silverstream Road development site on a weekly basis. These inspections focus on ensuring the works carried out on site are undertaken in accordance with the relevant resource consents and approved management plans. The inspections/audits enable officers to identify any non-compliance with consents at the time of the officer’s visit.

Due to the nature and scale of the works associated with this development, unforeseen problems (and the effects associated with them) can sometimes arise and then cease very quickly. Ultimately, compliance with the requirements of the consent is the responsibility of the consent holder. GWRC are committed to investigating non-compliance and taking all actions we can to change the behaviour of parties that do not comply with consents, regional rules and the Resource Management Act.

The GWRC officers who undertake compliance work associated with the resource consents WGN150264 and WGN1701115 are Rose Morris and Douglas Fletcher.

If you are concerned that the works being undertaken on-site may be resulting in effects on the receiving environment that are not in accordance with the suite of GWRC resource consents, please call the GWRC environmental hotline (0800 496 734).

Without calls to the hotline, at the time an issue is observed, we only get the snapshot of the site from the compliance visit and we may not have evidence to take any formal action. Calling the environmental hotline (0800 496734) triggers an incident response process in which the Duty Officer will respond and gather all available evidence to assess whether non-compliance has occurred.  Calling the environmental hotline enables an officer from GWRC to investigate complaints in a timely manner. The responding officer will contact a notifier back and if they have photographs these will form evidence in the investigation.

For further information on our investigation and enforcement processes please see our website:  http://www.gw.govt.nz/Enforcement/.

This subdivision is also subject to a number of Wellington City Council consents.

The first dealt with bulk earthworks on a potentially contaminated site, the second for a 138 Lot subdivision and associated earthworks and dwellings on an identified range of Lots within a Rural zoned area.

This site is one of the largest in the city currently undergoing subdivision and development.

Inevitably, a number of arms of Council are involved in this development, including:

Council monitoring officers will make regular visits throughout the duration of the development and undertake inspections to ensure that the work is being completed in accordance with the approved consent conditions (including plans), and to identify any breaches.

Breaches found will then be subject to further investigation. Where appropriate, enforcement action will be taken.

Matters from which complaints may be expected

The types of complaints that might be received, include:

The developer’s consultant, Mr Ian Leary, of Spencer Holmes, has asked that any complaints about the site also be forwarded or otherwise made known to him. Mr Leary may be contacted by phone at 04 474 1193, by cell phone at 021 517 953 or email at itl@spencerholmes.co.nz

In addition, complaints as to the following should also be reported to the agencies indicated for investigation and follow-up:

Any noise related complaint can be placed via Council’s call centre. After hours or early morning noise will, in the first instance be attended by a noise contractor. If they attend too late to identify the noise complained of, Council noise officers will often carry out surveillance on following days.

For other complaints or enquiries, officers may contact others within Council for assistance.

The fence behind 77-85 Silverstream Road

This matter relating to the provision of a 2m high ‘visually impermeable fence’ will be separately followed up with directly affected residents.