Rooks are large black birds with strong beaks which threaten the economic wellbeing and environment in the Wellington Region. They can be identified by their harsh “kaah” call.

Nesting groups are called rookeries. In the Wellington region rookeries typically contain up to 20 nests. Control is necessary to keep these numbers low.

Rook control has been undertaken in the Wellington region since the mid 1990’s. In Greater Wellington’s current Regional Pest Management Plan (2019-2039) rooks are a pest to be managed under eradication programmes. Our objective is to have no ‘active rookeries’ in the region by 2029.

Numbers have decreased by 86% in the last ten years. Although there aren’t many left, we still need to be vigilant to ensure that populations aren’t able to persist.

Why are rooks a problem?

During summer, the soil in which rooks usually find invertebrates to eat becomes too hard for them to dig.

To account for this, rooks target agricultural crops as a food source. They eat and destroy newly germinated crop seedlings, maturing lentil and cereal crops and ripening walnuts.

Precision planted crops such as maize, peas and beans are especially at risk, and sometimes need to be re-sown due to the damage caused.

Where are they found?

Today, rooks are mostly confined to northern Wairarapa, but have been present in Ohariu Valley and the Paekakariki area in the past.

We want to hear from you if you suspect you have spotted rooks on your own property, or a neighbour’s. Listen for the harsh “kaah” sound they make and look out for a large, glossy, purplish-black bird. 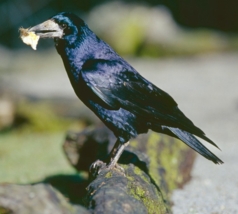 Rooks are most likely to be spotted in spring and summer. They usually nest in large pine or gum trees, or feed in flocks on pastoral land.

Rook control is a specialist task, which needs to be planned carefully and safely by Greater Wellington Biosecurity staff.

Do not attempt to control rooks yourself, as it may encourage the bird to scatter and eventually increase in numbers. So if you see one, try not to disturb it.

Note the location, take a photo if you can, and report it to us.

Additional information can be found at: