From the mid-1820s the area was dominated by the Ngati Toa tribe of Te Rauparaha who had come south from Kawhia and conquered the area. Evidence of Maori occupation, in the form of kumara-growing terraces above the cliffs, can still be seen today.

The Porirua Harbor region is rich in Maori history and Whitireia is a site which has particular significance to the Maori people. In traditional history it is reputed that Kupe landed at Komangarautawhiri, a point just south of Titahi Bay and while his canoe was left unattended, it floated away on the outgoing tide only to return on the tide 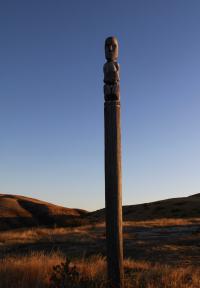 The Ngati Toa trace their ancestry to the Tainui people who migrated from Kawhia down the West Coast and settled in the Porirua area, after discovering the coastal and harbour waters to be equally as rich in sea food as their original home. The coastal area directly opposite Mana Island has long been known to the Ngati Toa people as a larder of kaimoana (seafood) and from earliest times through to the present day the Maori people have fished the waters and gathered kina, paua, and kuku along the coast. Cook Strait was known to the Maori people as the sea of Raukawa and is still referred to by that name on the marae.some hours later and come ashore at Onehunga Bay on Whitireia Peninsula. Kupe was so relieved that he left his anchor stone, named Maungaroa, at Onehunga Bay to mark the spot and it lay there for many years before being taken to Ngati Toa Domain and later to the National Museum where it is now in safe keeping. The stone was respected by Maori tribes over the centuries, but during the 1840s British troops stationed at Porirua broke chips off it. When some of them later drowned in the harbour it was seen by some Maori as punishment for their act of sacrilege. A monument commemorating Kupe's anchor stone can be found at the Onehunga Bay car park.

Although seafoods were plentiful, New Zealand in its natural state was sparsely endowed with edible plants and bracken fern become the chief vegetable food of the Maori. However, kumara was a preferred food and great efforts were made to cultivate it, which in turn lead to considerable modification of the soil and landform. Whitireia was a favourable site for kumara cultivation and the northern faces of the park show considerable and valued evidence of this activity. Although there is some disagreement on what species of potato was grown there it is more certain that Whitireia was considered a strategic site by Te Rauparaha for commerce with the early Europeans.

The park was set up by land acquisition from the Otaki and Porirua Trust Board and the Broadcasting Corporation of New Zealand with the generous co-operation of the Raukawa Trustees and the Ngati Toa people. A substantial donation by Smith and Smith Ltd, celebrating their centenary in 1975, enabled the purchase and development of the park to proceed, and it was established in 1976.

Since then Trust Porirua has contributed funding for track upgrades, and the Defence Force has removed abandoned motor vehicle bodies from the park.
Radio New Zealand controls 53 hectares of the park for its radio station there. The station was established in 1936. Its main mast is 220 metres high. Radio New Zealand leases part of its land to the park board which in turn leases much of the park for grazing, to keep the land in pasture and reduce the fire risk.

New Park Board established
In February 2011 the outgoing Board chairman Alan McKenzie signed a letter of agreement with Greater Wellington Regional Council (GWRC), for GWRC to take over administration of the park, effective from 1 March 2011.