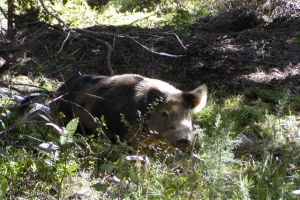 Why are feral pigs a problem?

All feral pigs originate from domestic species introduced by early settlers. Feral pigs continue to be illegally released for recreational hunting within the region. They frequent native and exotic forests, scrubland, and marginal farmland with areas of cover. They pose a serious threat to biodiversity by eating seedlings and root systems, native insects and ground nesting birds and their young. Feral pigs contribute to erosion through rooting, trampling, compaction and wallowing. Pigs often form large and distinctive game trails through areas of regenerating vegetation.

Feral pigs are a nuisance to agriculture because of their destructive feeding habits, often living in groups and overturning large areas of pasture in search of food. Pigs will kill newborn lambs and are a known vector of the disease Bovine Tb.

All feral pigs in New Zealand are the descendents of domestic pigs. Feral pigs are distinctively shaped with large shoulders, small rear quarters and a straight hairy tail. Often black in colour, they are also grey, brown, ginger, white, or any combination of these colours. Adults can weigh anything between 40 to 180kg. Feral pigs are omnivorous, opportunistic feeders with a wide ranging diet. They will eat grasses, roots, herbs, seeds, insects and small animals, and will scavenge decomposing carcasses.

Pigs were first released in New Zealand in the 1770s as a food source. A wild population soon established from escaped and released domestic pigs. Control operations and recreational hunting continue to the present day.

Any pig which is not held behind effective fences or otherwise constrained, or identified in accordance with a recognised identification system, is considered to be feral by Greater Wellington.

Feral pigs are a highly popular recreational hunting species. Contact a local hunting club and enquire about an experienced hunter who can assist with their control. In semi-rural or lifestyle areas safety is a concern, and the use of high powered firearms and hunting dogs must not endanger, annoy or frighten neighbours. A range of live capture pig traps are now available, which offer a less intrusive method of control.

Greater Wellington can provide information and advice on control techniques.

Additional information can be found at –

Feral Pigs- A Review of Monitoring and Control Techniques