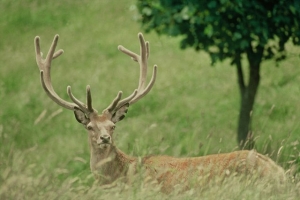 Why are feral deer a problem?

Deer are highly adaptable feeders that both browse and graze. Intensive browsing can remove much of the forest under-storey and strip bark from trees, impacting plant biodiversity. Stags thrashing and rubbing with their antlers also damage vegetation. Feral deer contribute to soil erosion through intensive browsing, soil trampling, compaction and wallowing. Deer are a known vector of Bovine Tb, a disease which threatens the agricultural industry. Deer in high numbers can damage feed crops, and graze large amounts of pasture.

There are three known species of feral deer in the Wellington region.

Red deer are a medium-sized deer with a reddish-brown coat and a creamy coloured rump patch. Adults weigh between 80 to 200kg. They are the largest and most common deer in the region.

Fallow are a small deer, with a coat that is either black, brown with spots, or occasionally white. Adults weigh between 30 to 85kg.

Sika are a small deer, chestnut coloured in summer with spots, and dark brown in the winter. When alarmed, sika display a white rump patch, and may make a piercing whistle. Adults weigh between 45 to 85kg.

Red deer were liberated in Wairarapa in the 1800s and became well established by the early 1900s. Fallow and sika deer have been illegally released in the Wellington region in recent times for recreational hunting. Red deer remain the most common species in the region. Feral deer frequent native bush, regenerating scrubland, exotic forestry and rough grasslands in the region.

Any deer which is not held behind effective fences or otherwise constrained, and identified in accordance with a recognised identification system, is considered to be feral by Greater Wellington.

Feral deer are a highly popular recreational hunting species. Contact a local hunting club and enquire about an experienced hunter who can assist with their control. In semi-rural or lifestyle areas safety is a concern, and the use of high powered firearms must not endanger, annoy or frighten neighbours.

Greater Wellington can provide information and advice on control techniques.

Additional information can be found at –