This fund has helped a wide range of local community groups in the Te Awarua-o-Porirua whaitua area to restore, maintain and protect our local taiao environment.

The Aotea Conservation Volunteers are part of the effort to restore the Kenepuru Stream in Bothamley Park with planting and weed control. We have been supporting this group since 2015 and the fund has helped them continue and expand on this work. 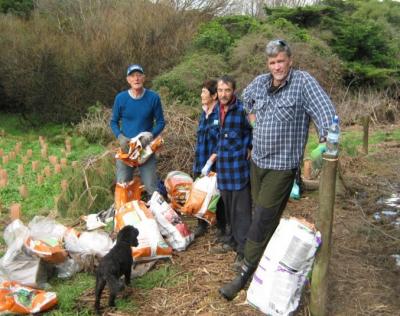 The Asert-Tatou Trust provides opportunities for people who are struggling to find work to build horticultural expertise at Te Rito Gardens, a plant nursery in Porirua. Since 2016 we have provided funding to help them grow plants for the Pauatahanui Wildlife Reserve and for the Enviroschools programme that creates lizard gardens and rehabilitates wetlands. The fund now also supports a project to grow plants and plant them along the Mitchell stream near their new premises in Kenepuru. The Trust does not use any chemical weed control, which will be of interest to others who want to take a similar approach. 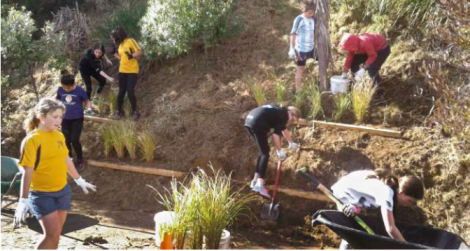 This group has been revegetating the Pāuatahanui Wildlife Reserve for over 30 years. They grow their own native plants, but their plant nursery has been affected by flooding which is likely to increase in frequency and severity due to climate change. The funding allowed the group to install a number of tables to protect plants from future flooding events, reduce plant pathogens and provide easier and safer options for potting up plants. 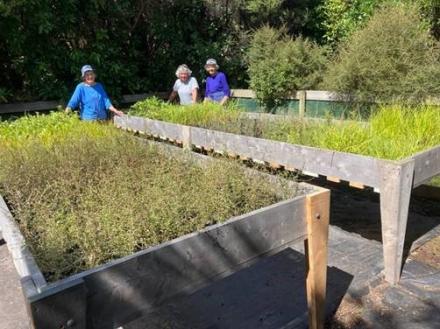 Based at Cannon’s Creek in Belmont Regional Park, this group has been working to restore biodiversity in the area for almost 20 years. This fund has helped them put in a pest animal control network of self-resetting traps. These traps are useful for areas that are hard for volunteers to reach, as they don’t require constant clearing, rebaiting and resetting. 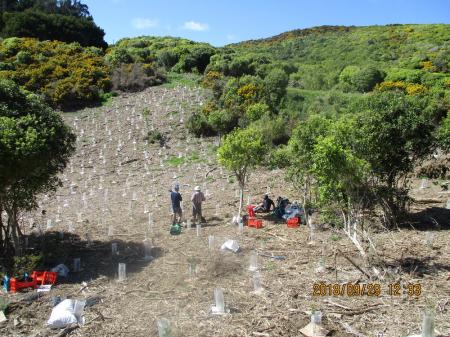 Friends of Taupō Swamp and Catchment

This new group has been clearing weeds, replanting with native plants, and doing pest animal trapping at the southern end of the wetland. They are also advocating for the important values of this biodiversity hotspot and they have spoken at hearings about developments planned for a nearby area of farmland that drains into Taupō Swamp. 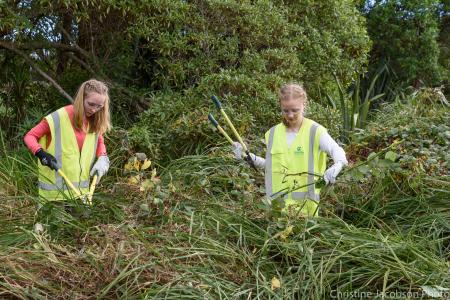 For more than 20 years this group has been working on restoring bush reserves around Tawa. They have been growing and planting native plants, and controlling weeds and pest animals. The fund has helped them extend their great work into new areas within the Reserves. The group is also working closely with school children and their local community to get them interested and involved in restoring their environment. 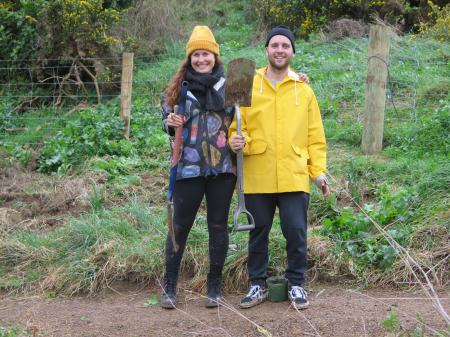 Through partnering with communities the Growing Places Trust restores neglected land along the road and railway corridor. They organise funding, plants and equipment, and arrange landowner permission to enable community groups to get involved in projects they might otherwise miss out on. We have been supporting this group since 2016 and the fund has helped them continue and expand on this work. 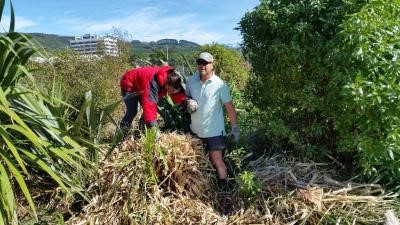 An amazing group of hard working people have been clearing climbing asparagus and other weeds by hand from native bush in and around the Marae at Hongoeka Bay, without using herbicides. Volunteers meet every Sunday and the group has been going since May 2019. The funding provided tools and equipment for volunteers and some animal traps and bait to allow native plants to regenerate naturally without being smothered by weeds or eaten by pest animals. 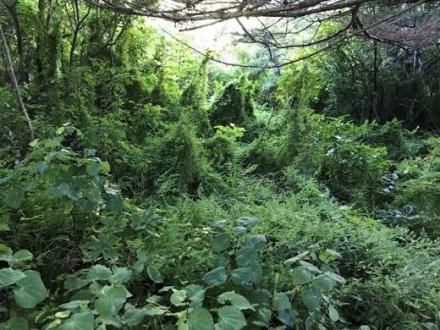 This group brings in people from all over the community, including the Scouts and local schools to take part in riparian planting and weed control beside the Kahotea Stream in Onepoto Park. We have been supporting this group since 2015 and the fund has helped them continue and expand on this work. 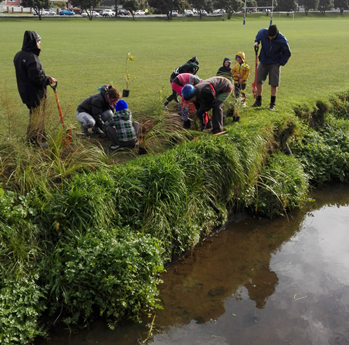 The Newlands Native Nursery provide free native plants for community restoration projects around the catchment. Volunteers grow a range of native species suitable for planting around streamsides, wetlands, and forest areas, and give them away to a number of different school and community volunteer groups. Planting projects are also undertaken. 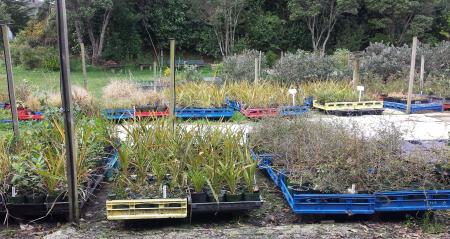 This group focuses on controlling a range of pest animals in neighbouring reserve areas, including wasps. They also support local people trapping pest animals on their own land. The fund is helping the group with this work and to expand their efforts to include a small weed control and planting project.

This group traps pest animals at a number of sites around Titahi Bay. Their work supports community environmental restoration projects along the Kahotea Stream and at Stuart Park. They also support local people trapping pest animals on their own land. The fund has provided traps and bait including self-setting traps that are particularly useful for areas that are difficult to access safely.

This small group of passionate residents are restoring a section of the Mungavin Stream where it flows through Mexted Reserve in Ranui, Porirua. The funding was used for native plants that provide habitat and food for native animals both in the stream and along its banks. This group also has regular ‘coffee bees’ to help create community and fun around the planting and weed control. 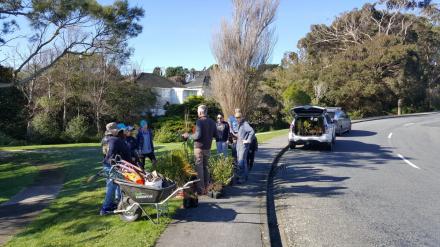 This kura Māori are replanting some areas near their school, including a small stream. Students are hoping to restore the mauri of this local koawa (tributary) which is at the start of the Kenepuru awa (stream) with a range of native species including some rongoā Māori (traditional medicinal) species. 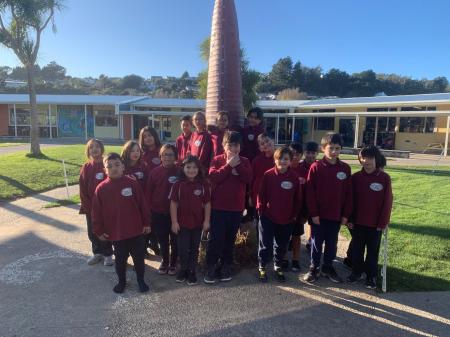 This group has worked for 12 years restoring dunes, wetland, stream margins and the coastal escarpment in the park. Most recently they have been planting natives alongside the walking track near Te Onepoto estuary. GW have supported this group in a variety of ways over the years, and they have been receiving this fund since 2016. 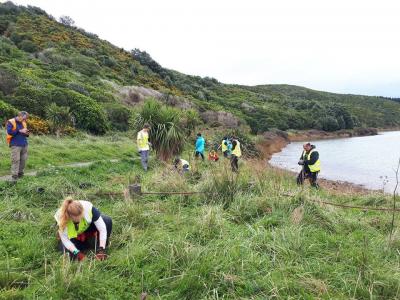