The Mt Climie ridge provides the southern and eastern backdrop (and windbreak) to Upper Hutt.  It is also part of the long northern skyline of the Remutaka Range seen across the harbour from Wellington City. 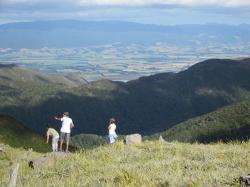 The track to Mt Climie starts from the upper picnic area at Tunnel Gully. Along the summit ridge the vegetation opens out to give magnificent views of the Hutt Valley.

The track gives you the opportunity to see the changes in vegetation in the northern Remutaka Range with increase in altitude and exposure to wind.

Look out for service vehicles at all times. Allow 3-4 hours return for the walk to the ridgeline.

Five interpretive sites are described below. Please see the attached map for the approximate position of the sites.

This lower forest is regenerating after past logging and fire damage. Most of the canopy consists of tree ferns and broadleaved trees such as rewarewa Knightia excelsa and broadleaf Griselinia littoralis. There are some miro Prumnopitys ferruginea, while rimu Dacrydium cupressinum and skeletons of dead rata can be seen emerging above the canopy.

This colder, wetterareais often under clouds and snow for short periods. Silver beech Nothofagus menziesii is the most common canopy tree but there are appreciable numbers of red beech N. fusca, hard beech N. truncata and kamahi especially where the soils are deeper. There are also a few Hall's totara Podocarpus hallii.

The understorey consists of pepper tree and stinkwood, and the mountain cabbage tree Cordyline individisa becomes a more obvious component of the forest. Astelia species become more common in the ground cover.

The forest canopy is now almost completely silver beech. The old trees are stunted and gnarled, their trunks and branches often covered in mosses and lichens. Occasional broadleaf and mountain three finger Raukaua simplex appear, and one of the forest snow grasses Chionochloa conspicua is common in the openings in the forest. Pepper tree is still the most common understorey shrub. Some tree ferns and many other ferns are plentiful.

Scattered beech can still be seen but most of the vegetation has been reduced by fire in the early 20th century. Most of the groundcover is a dense thicket of divaricating shrubs, Astelia species and Chionochloa conspicua. South of Mt Climie No 2 trig (860m) there is an area of true snow tussock, the only snow tussock on the Remutaka Range.