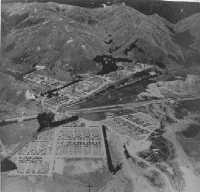 US Marines camp at Mackays Crossing

The coastal setting, plentiful food and central location of what is now Queen Elizabeth Park have long attracted people to the area. Maori have been living here for hundreds of years and there were major settlements at Wainui and Whareroa up until the mid-1800s. Although the land was covered in forest, the numerous waterways were deep enough for canoes to be paddled from Paekakariki to Waikanae.

Following Government land purchases in the mid-1800s, local Maori gradually left the area and European settlers farmed there. Land was cleared, the wetlands between the sand hills drained and pasture sown. From the 1840s the beach formed part of the main road north, with many travellers stopping overnight at Whareroa. Communication routes improved further and the railway line between Wellington and Foxton was completed in 1886. By the turn of the 20 th century, the beach highway was still providing access for the beachfront sections being developed in Raumati and Paraparaumu.

The park’s sandy beach and rural surrounds close to Wellington were an ideal training ground for American troops preparing to fight in the Pacific during World War II. Camp Russell was built near the MacKays Crossing entrance, Camp Paekakariki on what is now the southern entrance and Camp MacKay over SH1 on the present day Whareroa Farm. Together with they housed 20,000 Marines from June 1942 to November 1943. (Find our more about this period in the park's history at the marinenz.com website.)

Soon after the war, this land was set aside and the region’s first major park established. Named for Queen Elizabeth II before her coronation, Queen Elizabeth Park was opened during the 1953 Royal Visit and run by a park board. Many recreation facilities were developed in the 1950s-60s, including the motor camp and tramways museum.  Management passed to Greater Wellington in 1990 and the first park ranger started work in 1994. Today Queen Elizabeth Park remains a great place to unwind and enjoy the outdoors in the balmy climate of the Kapiti Coast.

Tangata whenua of the park are Ngati Haumia, a hapu of Ngati Toa, at the southern end and Te Atiawa ki Whakarongotai north of Whareroa Stream.

You can find out more about the history of Queen Elizabeth Park by downloading the park  Resource Statement.