Two million years of movement in the Wellington earthquake fault line underneath the Hutt Valley has helped form one of the region's most powerful rivers. Today the Hutt River flows from the southern Tararua Ranges through the Hutt Valley to the Petone foreshore.

The Hutt Valley has been occupied since at least 1200 AD when the Ngai Tara first settled there. They named the river Te Awa Kairangi or "the highly esteemed river" as it was a valued transport route and an important source of food. However, it was also difficult to defend and has seen significant battles, loss of life and a frequent change of guardians.

The first planned European settlers arrived in the summer of 1839-40, to be welcomed by Te Ati Awa. However, very few took up the opportunity because prior to the earthquake of 1855, the swampy nature of the Hutt Valley and its frequent flooding made it relatively unattractive for occupation. 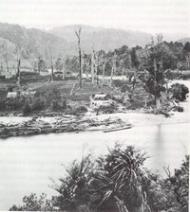 The 1855 earthquake raised the level of the Hutt Valley as well as the bed of the river, making the previously navigable river impassable and draining the surrounding wetland. Settlement increased slowly over the next 30 years, probably due to the frequency of the devastating "old man" floods, during the 1850s and 1880s. During the 1880s the population of the Hutt Valley increased rapidly but it was not until the mid 1890s that steps were taken to prevent flooding.

Over 100 years later the Hutt Valley is a very popular residential, commercial and recreation area. Still, its particular geography - a narrow floodplain confined by steep valley sides - emphasises the risks posed by the river. Greater Wellington Flood Protection is responsible for minimising this risk, particularly when the river unleashes its full power.

About the Hutt River Trail

In the early days, foot tracks along the banks of the Hutt River extended to the Wairarapa over Remutaka Hill. The Hutt Valley Rotary Clubs and Greater Wellington developed the idea of the Hutt River Trail during the 1990s to remind us of these tracks and recognise 50 years of Rotary in the Hutt Valley. These organisations have signposted, surfaced and marked the Trail, with assistance from Hutt City Council, Upper Hutt City Council, service groups and government work schemes.

Many parts of the Trail are next to private land. Please stay on the Trail and respect private property.

Expect a gravel surface along most of the Trail although some down river sections have been sealed and there are some grassy areas south of Totara Park bridge. Be aware that some parts are narrow and may be affected by high river flow eg Taita Gorge near Silverstream.