On a cold August morning in 1846 the first shot was fired in a confrontation between Government forces and around 300 of Te Rangihaeata’s Ngati Toa near the summit of Battle Hill.

Relationships between the Crown and Maori in the Wellington region had been breaking down for some years, due to the New Zealand Company attempts to purchase large tracts of land for Pakeha settlers. Maori under the protection of Te Rangihaeata had been evicted from their lands in the Hutt Valley and Crown attempts at arbitration were unsuccessful as Ngati Toa continued to resist growing pressure to sell their land.

In a climate of mounting fear following the conflict and deaths at Wairau and in the Hutt Valley, Governor Grey hatched a two-pronged plan to secure Ngati Toa’s land by stealth.  The first phase of the plan was to kidnap Te Raupararaha from his Pa in Plimmerton, and then the way was clear for Grey to launch a second-phase attack on Te Rangihaeata and his Ngati Toa and Ngati Rangatahi allies.

Retreat up the valley

Leaving from the Hutt Valley, a mixed group of around 500 British troops, police, militia and Te Atiawa allies joined forces to converge on Te Rangihaeata’s pa at Pauatahanui. Finding it deserted, they pursued him through dense forest up the Horokiri Valley to what is now Battle Hill Farm Forest Park.  A few hundred Ngati Toa under the leadership of Rawiri Puaha joined with Grey’s forces in pursuit of Te Rangihaeata.  However these warriors turned out to be loyal supporters of Te Rangihaeata, supplying him with ammunition and assistance in effecting his eventual escape.

Loss of a chief

Te Rangihaeata had built a temporary pa on an almost unassailable razorback ridge near the summit of Battle Hill. On the morning of 6 August, the Government force attacked and tried to storm the pa. Return fire from Te Rangihaeata’s men halted the attack, killing three Government troops. Sending to Porirua for backup mortars, the allied force settled into a siege, and bombarded Te Rangihaeata’s pa for several days.

On 13 August, after losing at least nine people and only just surviving on mamaku, Ngati Toa fled north.  Te Rangihaeata was never to return to his turangawaewae or “place of standing” in the Wellington area.  Instead he was forced to live out the remaining 10 years of his life in exile with his Ngati Huia relations, at Poroutawhao, north of Levin.

Demoralised and devoid of the leadership and protection of their two principal chiefs, Ngati Toa finally conceded to Crown demands for the sale of their land.  In return for a few thousand pounds and the promise of Te Rauparaha’s release, the Crown extracted from Ngati Toa around 608,000 acres in the Wairau and 25,000 acres in Porirua, including what is now the Battle Hill Farm Forest Park.

Care of the Abbotts 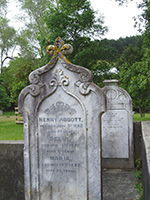 In 1860 the bush covered land was sold to the 62 year old Henry Abbott who set about clearing it and stocking it with cattle. On his death in 1882 the farm passed to his sons Roderick and Nicholas, and it remained with his family until 1975.  Wellington Regional Council purchased the park in 1987.  Henry Abbott, together with his son Henry and daughters Maria and Delia are buried at Battle Hill in a small graveyard, together with two of the three militiamen killed in the battle of 1846.